Kanban is one of the most popular methods in the agile project management world. But what is Kanban actually? In this article we want to bring more light into the method named after the Japanese word for “card”. So continue reading if you are interested in this very special tool and method.

Kanban comes from the Japanese and means “card” and this already provides an important key point if you want to understand Kanban.

Kanban is a type of process control, which like many other agile methods is used especially in software development. But it has also found its way into many other industries, as well as in the private sector and enjoys great popularity.

The method originated in 1947 in Japan, where it was invented by the Toyota Group.

In addition, Kanban is based on the Lean principle. The Lean method is based on keeping all processes as lean and minimalistic as possible in order to get the most value out of them. This was also  what Toyota wished for back in 1947. Because in order to increase productivity and become more flexible, Toyota minimized inventories and saved costs at that time.

In IT and project management Kanban found its fans only somewhat later. 2010 IT Kanban founder David Anderson published the first book on the subject.

Kanban is based on the so-called pull principle. This means that a person consciously gets his tasks, or pulls. Because as has long been confirmed, people are not good at multitasking. If we are overloaded with tasks, not only our psyche will suffer, but also the result of our work. Nevertheless, people often find themselves overwhelmed with too many tasks at the same time. Therefore it helps to complete its tasks, one after the other and well organized.

Therefore, tasks are collected and divided into different columns and states. And they are visible for all participants.

Transparency is the key

To make all tasks (of a project) visible for everyone and to give an overview on who is responsible for which tasks and if these tasks are already processed teams are using the Kanban Board. The board divides tasks into three columns: To Do, Doing, Done.

Mostly sticky notes or index cards are used for this board, which can be moved on a whiteboard, a blackboard, or simply a wall.

Under those columns cards (hence the Japanese word for card) are collected, on which the individual tasks are to be read. These are moved from left to right. Of course, any other columns can be added. For example, a column for i.e. “Quality check”. However, one should not forget that the board should remain clear, agile and lean.

Above all, the “Doing” column should only be allowed to contain a limited number of tasks, because, as already mentioned, people should not work on too many tasks at the same time. It is all the nicer when the little cards collect under “Done”. Because that is also an advantage of the Kanban system: One has also its successes and completed tasks still on the screen and can be pleased about them, before they simply “disappear”.

The four basic principles of Kanban

To work efficiently with Kanban and the associated board David Anderson has summarized four basic principles. If they are implemented by the team, the work can be simplified and also the pull function of the method can be used better.

But let’s have a closer look at those principles!

This basic principle ensures that things are actually completed before others are started. This approach prevents harmful multitasking.

Everyone involved should aim for improvement and learn from previous processes.

Kanban does not have to displace existing processes, rules or roles. It can be easily implemented without compromising old responsibilities. It should serve as an additional productivity enhancer.

Everyone involved should know their responsibilities and have evolutionary change, or optimization, in mind. For this to happen, there must be a sense of “leadership” at every level.

The method is very popular with teams that already work in an agile manner. For example, by people working according to SCRUM. Although the third basic principle states that Kanban does not endanger existing structures, it is only advantageous if agility is lived in the project team in several respects.

The principle can be used as a large board for a team of several people in complex projects, but also for the individual in private. The Kanban Board is available in all sizes and forms, whether digital, or haptic, whether homemade, or purchased. Visualizing your WIP (work in progress) and moving individual tasks across its three phases while keeping an overview can make a lot of work easier. 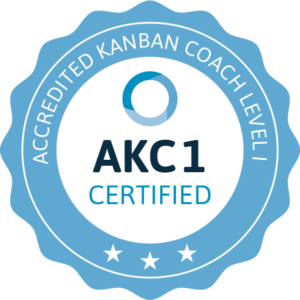 Many tools help you with Kanban

Although the original idea behind the Kanban method was a haptic board on your wall, the principle already exists digitally and mobile. How you prefer to sort your “To Do”‘s and move them from left to right is up to you. But especially in times of home offices and shared lists, an online Kanban board can be very helpful for teams. Today, countless software and tools enable us to keep our Kanban board digital and to share it with others in the working world.

Get your international Kanban Master certification with IFAAI

With the internationally recognized Kanban Master Certification of the Institute for Agility and Innovation you can prove your Kanban talent all over the world. With a Kanban Master certification you automatically expand your job opportunities and multiply your possibilities. Become a Kanban Master in no time with the IFAAI exam – it pays off!